After several decades of relatively little Gypsy Moth Caterpillar activity, these destructive insects are back. Many areas of Long Island have experienced extensive defoilation from the caterpillars during the summer of 2015. Gypsy Moth Caterpillars are voracious eaters and can make quick of all the leaves or needles on your trees in a matter of days. YOU MUST ACT QUICKLY!!! Depending on your type of trees and their overall health these insects can potentially kill your trees in 1 to 2 years.

At the very least they can cause a fairly healthy landscape to go into severe stress and decline, with only moderate activity. A weakened tree is very vulnerable to disease and fungus. The leaves and/or needles on a tree are very important part to their existence. The leaves provide the tree food through photosynthesis as well as many other functions that is important to their health and survival.

Facts about Gypsy Moth Caterpillar Problems and their treatment options:

What are Gypsy Moths?

The gypsy moth(Lymantria dispar) is an example of an experiment gone horribly wrong. The moth was brought to the United States in 1869 in a failed attempt to start a silkworm industry. Escaping soon after, the gypsy moth has become, over the past century, a major pest in the northeastern United States

Tree damage is caused by the insect larvae, or caterpillars, which hatch from their eggs beginning in early spring and continuing through mid-May. The larvae move to the leaves of trees and begin to eat, mostly at night. During daylight hours the larvae seek shade from the sun but feeding can still occur during the daytime in heavy infestations.

As might be expected, a caterpillar’s appetite increases with each shedding of its layers. Feeding continues until mid-June or early July, when the caterpillar begins the pupal stage emerging, finally, as a Moth.

The gypsy moth caterpillar is not a fussy eater. It has a preference for the leaves of deciduous hardwood trees such as Maple, Elm, and particularly the Oak. Gypsy moths can also feed on Alder, Apple, Birch, Poplar, and Willow trees. As it grows, it will also continue to attack Evergreens, Pines and Spruces. Gypsy moths do not seem to like Ashes, Sycamores, Butternuts, Black Walnuts, Dogwoods, and Balsams. However, during heavy infestations, competition for food will force the caterpillar to attackand eat almost any tree or shrub. 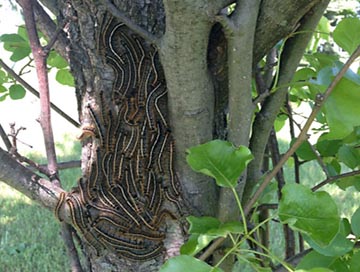 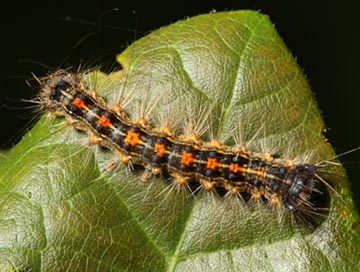 Signs of a Gypsy Moth Infestation:

The Damage they can cause:

The gypsy moth caterpillar is not a fussy eater.  It has a preference for the leaves of all types of hardwood trees such as maple, elm, and particularly oak.  Gypsy moths can also feed on apple, alder, birch, poplar and willow trees.  As it grows it will also attack evergreens like pines and spruces.  Gypsy moths appear to dislike ashes, sycamores, butternuts, black walnuts and dogwoods and balsams.  However, during heavy infestations, competition for food will drive the caterpillar to attack almost any tree or shrub. 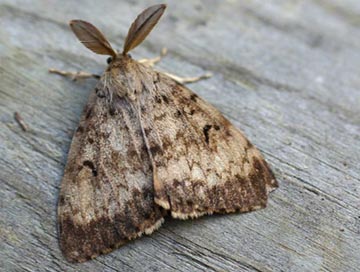 With Alternative EarthCare’s services you can be worry free and take back the outdoors for you and your family. The insects will be gone!!! Our Horticulture Sprays are applied every 3-4 weeks for managed insect control of the caterpillars on your property. Alternative Earthcare guarantees our results provided you take the program that our expert Service Manger’s recommend. 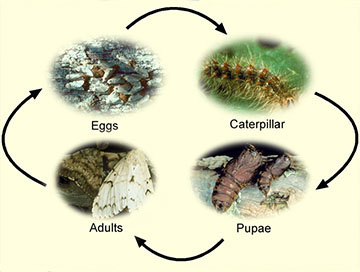 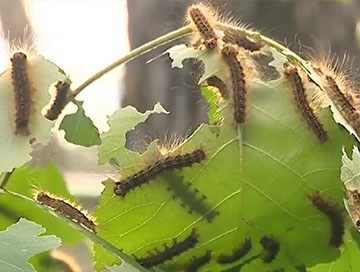